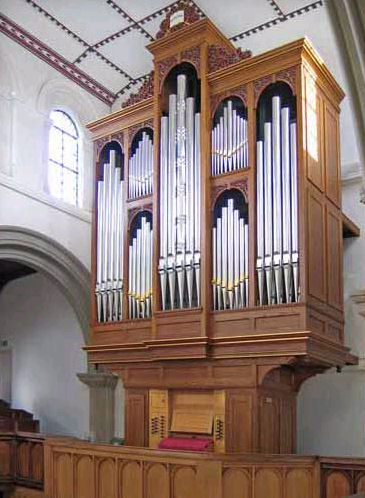 In 1985 the church was extensively re-ordered and a Narthex created in the last two bays of the Nave behind a newly constructed dividing wall. This wall presented an ideal location for an organ, and in 1995 a western gallery was built in preparation for the new instrument. Installed in the autumn of 1999, St Paul’s organ was our final opus of the twentieth century.

The casework takes inspiration from the rounded “romanesque” arches of the church and the carved screen beneath the gallery. It is made of Oak, stained and finished to match the galleries within the church, with touches of crimson and gold around the carvings and mouldings. The crest surmounting the centre tower contains the legend Spiritus Gladius and crossed swords emblem of St Paul. The polished tin front pipes feature an embossed central pipe.
The two manual and pedal divisions are all housed within the case, speaking directly through the front pipes. The Great is at impost level, with the Pedal divided on either side, while the enclosed Swell stands above the Great in the upper part of the case.
The stoplist:

3 couplers:
Swell to Great
Great to Pedal
Swell to Pedal