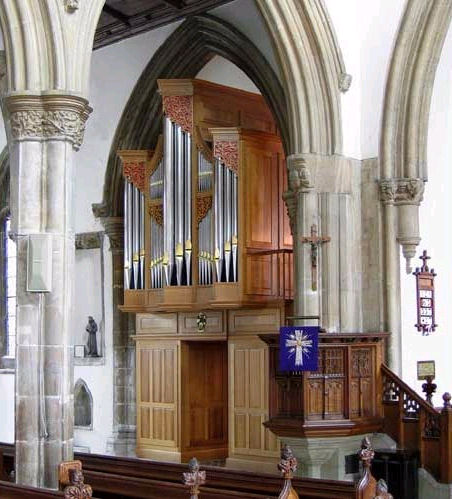 The new organ (1995) was built as part of an extensive programme of refurbishing in this 15th century church; it stands in the entrance to the Trinity Chapel as if on a screen, and it is possible to walk through the lower case into the chapel beyond. The console is offset on the southern chancel side of the lower section, placing the organist in good contact with the Choir in their chancel stalls, while the opposite north side is occupied by the larger pipes of the Pedal organ. This position allows the instrument to speak freely into the main body of the church because of
the large and lofty transepts and relatively short nave.
The case is of solid English Oak, with carving and fretwork executed by Derek Riley, and bears the coat of arms of the reinstated county of Rutland – the smallest country in England – Multum in parvo. The upper case is “double fronted”, having an identical appearance to both East and West. On the Nave side the front pipes, with gilded mouths, comprise the bass of the Great Open Diapason, while to the East the Pedal Principal is in prospect. Within the case are two sets of swell shutters, also facing East and West, which allow the organist added flexibility for the accompaniment of both choir and congregation.
The consultant for the project was John Norman.
The stoplist: