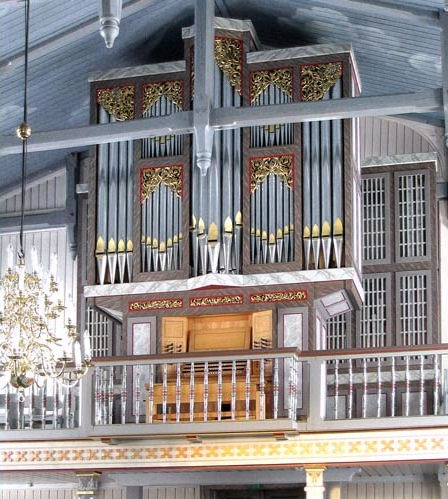 Nes is situated in the Hallingdal valley of southern Norway, some 175 km north west of Oslo. Nes kirke is a typical Norwegian wooden church, its white painted exterior standing among trees on the outskirts of the town.
The new instrument for Nesbyen was the first organ of real size to have been exported from Britain to Norway in recent times. Construction
began in England during 1998 and the organ was installed on the west gallery of the church in March 1999. Whilst the organ is predominantly English in its overall style and conception, the stoplist was planned with a leaning towards the French classical school. It is a versatile instrument, well able to do justice to a wide range of repertoire from all periods.The consultant for the project was Dr. John Rowntree.
The casework marbling and gilding was executed by Sigmund Haraldseth, a local artist, to complement the interior decoration of the church. In contrast, the console is of polished oak with blackwood inlays to the stop-jambs, keycheeks and music rest. The natural keys are covered with Bone, with Blackwood sharps.
The organ stands in the rear gallery of the church. Limitations of height, and the spacing of the roof beams lead to the layout of the instrument
being designed with the three manual divisions housed in the main case, the Great at impost level with the Swell box above, and the Echo organ sitting in the lower case behind the console. The Pedal pipes stand in divided cases behind the instrument on either side of the rear entrance to the gallery.