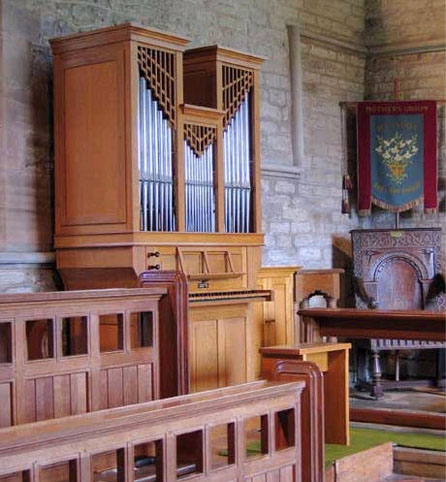 This was the first new instrument made by Kenneth Tickell in 1985. It was originally displayed at the exhibition of small organs held at the St Albans International Organ Festival, where it attracted the attention of consultants and players, rapidly leading to further commisions for new instruments. After the Festival, the organ was acquired by the village church of Preston Bagot in Warwickshire.
The casework is of made of English Oak, the pipeshades drawing inspiration from the Choir screens at Coventry Cathedral, where Kenneth Tickell studied the organ in the early 1970’s. The keys are covered in Satinwood and Ebony, controlling a sensitive suspended action. The two wooden flute ranks are made of Pine and Mahogany, while the Principal, which has its lowest two octaves in prospect, is of polished tin. The lower part of the case contains a small electric blower and wedge bellows.
The stoplist: